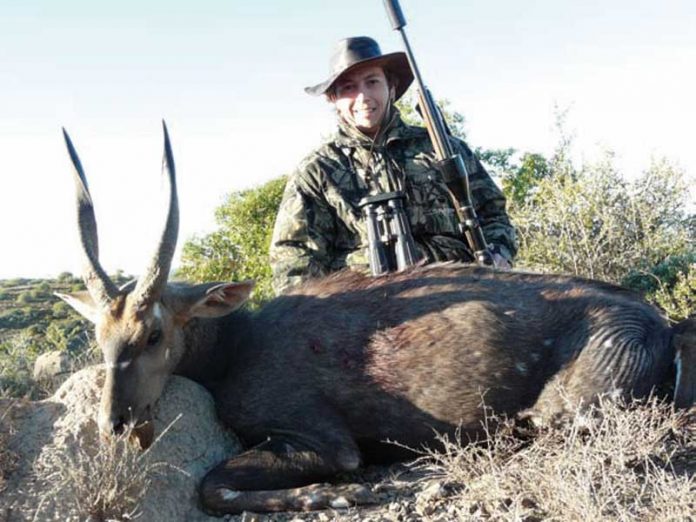 The roe deer is a species that suffers a high mortality in freedom due to diseases, predators or harsh winters. Its biological defense, which in recent decades has proven to be very effective, is a high birth rate and very early development.

This early growth, which is also reflected in its horn, has been verified in Valsemana; and although half of the first-roe deer analyzed are bundles, the other half are already wrestling; and some have been cataloged that were perfectly developed, approximately 10%, roe deer with full six-pointed horns, including some with quality trophies.

The study methods have been perfected over the years, and currently a gps locator is attached to the roe deer on its horn so that it can be retrieved after removal . This has allowed a detailed monitoring of many specimens, year after year, and draw interesting conclusions about the evolution of the trophy with age.

For example, the criterion of considering a selective roe deer for carrying a deformed horn has been questioned, since, depending on the injury and in certain circumstances, roe deer of these characteristics have developed perfectly normal horns the following year.

Another interesting fact that has been found is that the complete development of the trophy, contrary to what one might think, is very early, sometimes after two years , and that after three the evolution is minimal, to decay at seven or eight years.

This has provoked a debate in recent times about the appropriate formula for evaluating trophies, and the possibility has been raised of increasing the animal’s age score in some way, to allow quality roe deer to arrive in the last years of its life. with the aim that they breed as much as possible by transmitting their genes, although the difficulty of their formulation has meant that for now the proposal has not been successful.

The age of the roe deer, in practice, in the field and in light of the data obtained, it is difficult to assess judging its antler and before being able to analyze dental wear; the only thing that the hunter can attend to is intuition and experience, the attitude of the animal and its general appearance, since the horn in that sense gives few clues.

Perhaps the only fact to consider when assessing the age of a male through its horn is that, apparently, the rosettes do increase in diameter with age and their appearance is different in an old animal than in a young one, acquiring an inclination characteristic over time.

The bone loss that occurs in the pivot with each removal, leaving it shorter each year, causes a different formation of the rosette. Analyzing the interesting graphics obtained, it seems that this is the reason for the small increase in score that the trophy suffers from the third to the eighth year, so it could be a parameter to reward age.

The number of animals analyzed so far has been just under 250 roe deer a year and a half, just over a hundred two and a half and about 60 three and a half; figures that progressively decrease to ten specimens of nine and a half years, which may give an idea of ​​the age range of the population, although another question is whether these data can be transferred as is from a population in semi-freedom to a completely wild one, with variations in density, etc., that differentiate them. Surely the vast majority are comparable.

Many of the objective data are exposed in Valsemana , but there are many more waiting to see the light. The complete information is planned to be included in a publication, of which its edition has already been approved, which seems unique to us in this discipline and which we eagerly await roebuck lovers.

THE APPEARANCE OF THE HORN

Some roe deer, towards the third month of life, in the autumn, begin to produce testosterone and develop a bulge, which in some specimens may appear to be a very small and non-rosette first horn, or more precisely a prechord , which already grows covered with ‘velvet’ and that completes its development in December, when it loses said blot that covers them.

These ‘buttons’ usually fall between January and February, leaving the supraciliary pivots or processes prepared so that the posterior horns are born from them.

The new horn will grow between the months of February and April, while the adults unroll. The drafting of this occurs between April and May, at which time it adapts to the adult cycle.

One of the observations carried out in Valsemana is that, contrary to popular belief, a first-deer roe deer can develop a full six-pointed horn , sometimes of a good size, so its bearer can be mistaken for an adult specimen. .

THE GROWTH OF THE HORN

As soon as the top is removed, the top of the pivot begins to bulge. A mass of blood vessels and nerves, closer to a muscular structure than to a bone, forms the new horn, which at this stage is covered with a velvet or fluff that protects it from the outside.

Little by little this mass is consolidating from the bottom up, becoming first a cartilaginous tissue that, through the contribution of calcium and minerals, ends up being a bone structure.

When the horn is dried by a hormonal process, the roe deer removes the lint by rubbing the branches and the ground, which is known as ‘corralled’, due to the shape that the lint takes on when it comes off, something that occurs between the months of March and May.

Older individuals draw earlier than younger ones. The rubbing with the branches, in addition to serving to mark the territory, provide organic matter that gives color and darkens the horn.

Finally, between October and November, the union between the pivot and the horn weakens due to the onset of the appearance of cells that will form the next horn, and the roe dehorns, that is, loses the horn and with it some of the bone pivot, so each year is shorter.

MEASURES OF THE DEER STUDED

In the table you can see the evolution of the horn and the points of the roe deer studied throughout their lives.

In Valsemana there is a multitude of data of this type, which provide information on the biological evolution of the roe deer and which will be compiled in the future in a publication of assured interest to the lover of this species.

Bright and Colorful Coats and Jackets You Need to Buy Right...

How to Look Stylish by Wearing a Hoodie

ABOUT US
“TheUPFeed.com” is your one place destination for all latest trending news and web feeds. We also accept Guest Post for all niches like News, Sports, Health, Fitness, Fashion, Travel, Business, Services, etc. from every corner of the world. If you would like to contribute to our website, please contact us today. The UP Feed, Your Way!
Contact us: theupfeed@gmail.com
FOLLOW US
© Newspaper WordPress Theme by TagDiv